Coffins vs Caskets: A Review Of The Difference 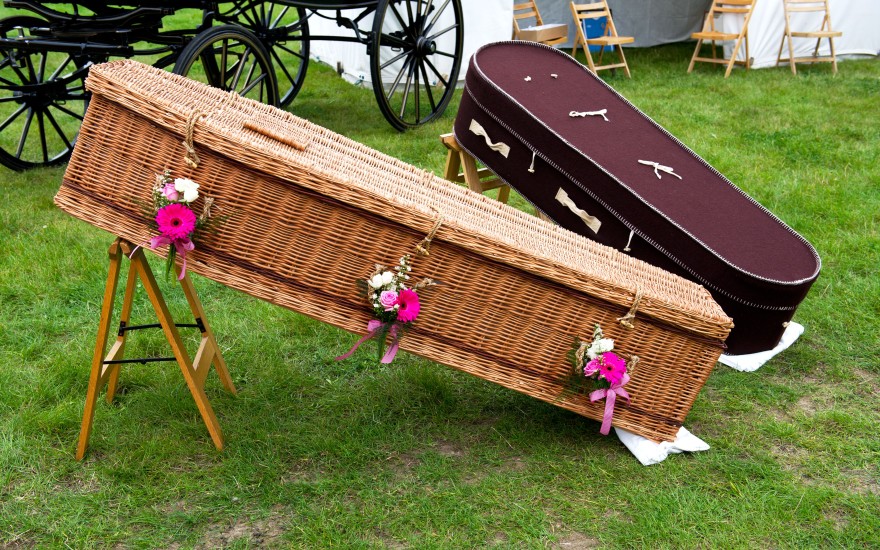 The difference between a coffin and a casket can be important for some people.

A loved one may request either type for their funeral, but if a funeral director offers you a casket when your loved one has requested a coffin this is likely to cause stress if you don’t know about coffins and caskets.

It’s best to just avoid confusion and unnecessary worry by knowing what is expected before-hand so you don’t end up stressed out about choosing the wrong thing!

Is there a difference between coffins and caskets?

If a loved one has requested a coffin will it make a difference if you buy a casket? You might think you know the answer to this, but believe it or not – neither one may actually be what they seem.

We don’t make good decisions when our world is falling apart and what seems like a small decision to a rational person can feel like it’s too much when you are experiencing grief.

In this blog post, we’ll explore the differences between coffin & casket so that you can make an informed decision about what is right for your needs.

An Introduction to Coffins vs Caskets

When I was trying to plan my funeral, I really didn’t like the idea of a traditional funeral with a big heavy coffin, and sombre black hearse . I want more of a celebration of my life and not a traditional formal funeral.

It’s not easy trying to decide what to do and what is best.

The first thing I had to figure out is what is a coffin and what is a casket?

I got a bit confused because I didn’t understand  coffins vs caskets. Why was one was a casket and the other a coffin. It seemed they were both just containers for my body before it was cremated or buried in the ground.

It got even more confusing when Google  kept showing me small caskets that would be used to hold your ashes if you were cremated.

So I did a little bit of research on coffins vs caskets and this is what I found.

What Is A Coffin?

In this cartoon we can see Dracula lying in his six sided wooden box. It’s tapered at the feet and wider at the shoulders. 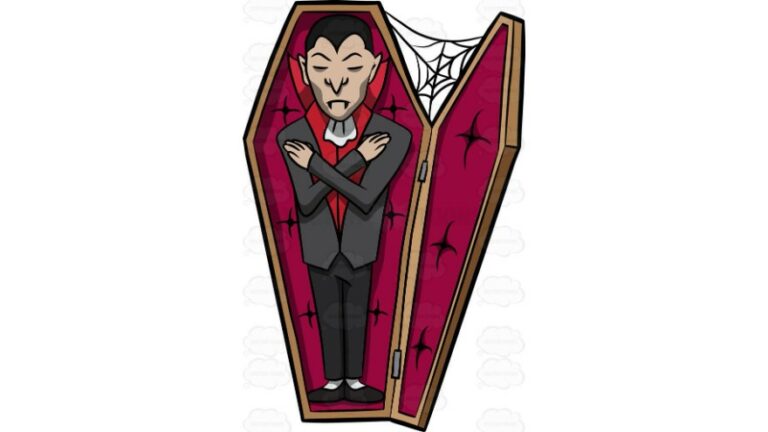 Draculas coffin fits the classic definition of a coffin: A container used for burying bodies that has 6 sides and is wider at the shoulders and tapered at the feet.

Most websites use this as the definition of a coffin. However, I soon found out it wasn’t exactly a one size fits all definition.

Take a look at the wooden coffins below in this really interesting short video about the strange miniature coffins found in Scotland. You will see that they are not six sided. They have just 4 sides.

The Mystery of the Miniature Coffins: The XVII

Ancient Egyptian wooden coffins are also not six sided, instead they are carved to fit the person’s body. If you’re interested you can learn more about a 2019 discovery of ancient coffins at the CNN website.

What Colours Do Coffins Come In?

Choosing a coffin is an important decision. After all, it will be the last resting place for you or your loved one. Thankfully, there are many options available when it comes to coffin design, and one of the most important choices is the colour.

In the past, most coffins were made from natural wood, which meant that they were limited to a few basic colours. However, today’s coffins come in a wide range of colours, from traditional black and brown to vibrant blues and greens, and if you choose a wicker casket or a cardboard coffin you can even have a rainbow of colours. 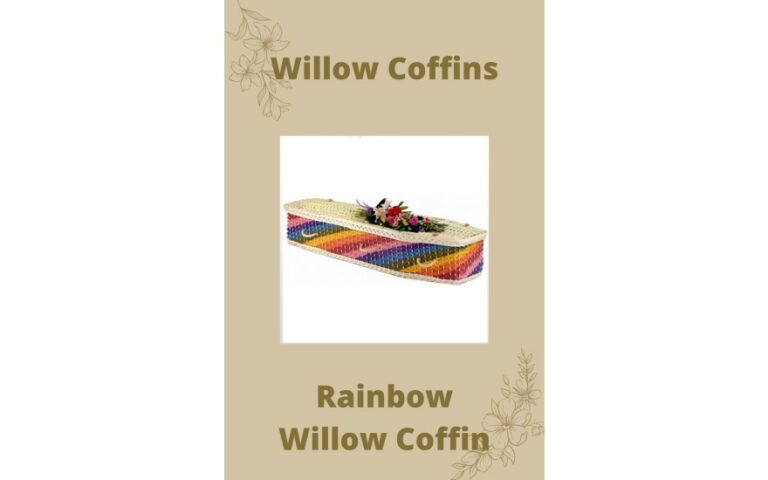 What Are Coffins Made From?

Would you believe that coffins are not always made from wood? In fact, they can be made from a variety of materials, some of which you might not expect.

Coffins can be made from a variety of materials including

You may come across articles that talk about stone coffins. They are referring to granite or marble caskets & coffins. The UK and Italy favour more delicate marble coffins like this one made by J C Atkinson UK

You will often see wicker caskets for sale but this is not a material.

Wicker describes how the material is used to make the containers.

Common materials for wicker coffins are willow and seagrass. These are flexible natural materials that can be easily woven together to form stunning & unique willow coffins/caskets. These are very popular now because they are made from sustainable resources and can be used in natural funerals.

There are a few ways to tell if a container is a coffin. One way is to look at the shape. Coffins are typically long and narrow, often with tapered ends. They are also generally quite shallow, which allows for easy carrying. So if I had to say what a coffin is I would summarise it like this: 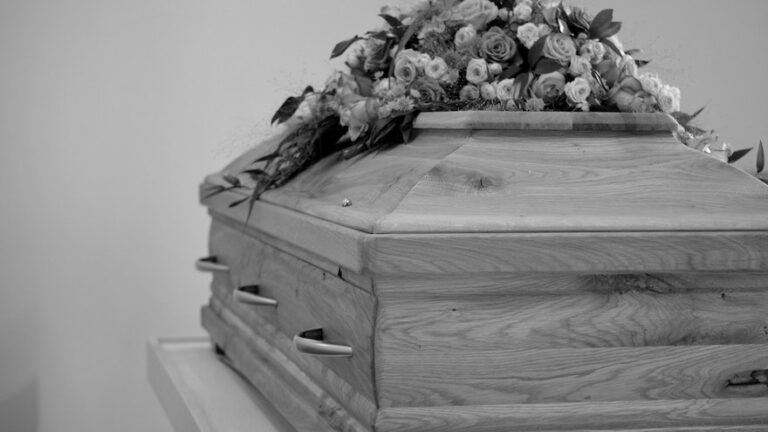 What Is A Casket?

If you thought that casket was an American term and coffin a British term you would be right. Although there is a little more to it.

The word coffin is very old and can be traced back to Greek times.  We know that the word has been used a long time in the UK as written records show it was being used in 1320.

Coffin is also the preferred word when it comes to UK laws. For example if you want to claim help and support towards funeral expenses you will see that it’s possible to get help with the cost of a coffin.

In America they prefer to use the word casket instead of a coffin and caskets are mentioned in some legislation, but this wasn’t always the case.

It seems that Americans started with the word coffin and then changed it to casket at some point during the early 1800’s. It has been suggested that people were so sick of seeing coffins and dealing with death that they wanted to change things to try and relieve the heartache and brutality of death.

As a result, expensive decorated 4 sided coffins which they called caskets began to make an appearance at funerals.This was an attempt to show off wealth, make death seem less depressing and to show a new way to celebrate a person’s life.  By 1832 the word began appearing in written documents.

Caskets often have a hinged lid, some have split lids so that the top half can be opened for viewing. Their interior is often very luxurious.

What Colours Do Caskets Come In?

If you’re looking for a unique way to personalise your casket, you may be surprised to learn that there are now many different colours available.

While the traditional black casket is still a popular choice, more and more people are opting for coffins in brighter hues. From pink to purple to green, there are now caskets available in nearly any colour imaginable.

And if you can’t find the perfect shade, you can even commission a custom-made casket in your favourite colour.

Wicker caskets can be dyed to your preference. You could even have a rainbow coloured one if that’s what you want.

Whether you’re looking for a traditional black casket or something a little more colourful, there’s sure to be a coffin that’s perfect for you.

What Are Caskets Made From?

When someone dies, one of the decisions that needs to be made is what type of casket to bury them in. This decision can be difficult, as there are many different materials that caskets can be made from.

Caskets in the United States are typically made from wood, metal, or fibreglass. Caskets are also made from stone – this is referring to marble or granite. The US favours heavy stone caskets which can be very expensive.

The most common type of wood used is mahogany, although other woods such as oak and pine are also used. Metal caskets are usually made from steel or bronze. Fibreglass caskets are becoming more popular in recent years, as they are more affordable than metal or wood caskets.

There is a growing trend to have more environmentally friendly caskets as natural funerals and alternative burials become more and more popular.

As a result, wicker caskets made from materials like willow & cardboard are becoming more popular. 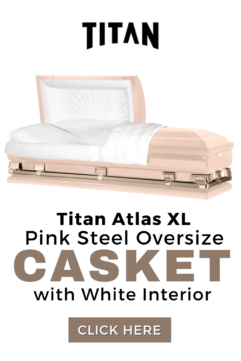 It’s good to remember that Casket is the preferred term for Americans. Caskets are

When most people think about caskets, they imagine a large, rectangular box. However, there are actually two different types of caskets: the large casket for burials and the small casket for cremation urns. So why are there such big differences in size? Let’s take a closer look at this mystery…

The main difference between the two types of caskets is their intended use. Large caskets are designed to be buried in the ground, while small caskets are meant to hold cremation urns. This is the key distinction.

The 1800’s saw the rise of new terminology when Americans started referring to coffins as caskets. This was confusing because “casket” had already been in use and had an established meaning which described small boxes used for jewels

Historically, ashes would be kept in what was called a funerary urn, not a casket. These urns tended to be quite simple and were typically buried in a grave plot. However, some time back in history we began using the word casket to describe a small box or a small urn that could be used to keep a person’s ashes in.

Today you can get all sorts of funeral urns or caskets. From highly decorated to simple environmentally friendly caskets that are designed for the natural funeral and alternative burials.

It’s not entirely clear when we started calling urns/containers caskets but we do and I suspect a lot of it has to do with google and computer language rather than anything else.

Many websites seem to use the words coffin and casket interchangeably. This is probably because Google makes no distinction between them, giving their definition as “a container for holding dead bodies.” the same meaning.

Traditionally legal definitions can be relied on to clearly identify things but when it comes down to coffins vs caskets things are blurred together.

The Scottish government provides the best example I have found of an easy to understand definition relating to coffins & caskets.

A box or other container the person who has died is placed in.  May be made of wood, wicker, bamboo, wood effect material, wool or cardboard.  The material that the coffin is made of will have an impact on the price charged for it.  Sometimes called a casket.

They also have an easy to understand definition of a casket

Usually a container for ashes. Alternatively, this is also sometimes used as another word for a coffin.

As you can see there is no big difference between coffin and casket.

Conclusion About Coffins vs Caskets

The only thing we can say for certain is that a coffin and a casket is a container for a body.

Coffins vs caskets isnt important unless someone has expressed a specific wish. Otherwise don’t stress it!

Plan your final goodbye in advance and make very clear funeral wishes so that those you leave behind can fully grieve for you without the stress of trying to figure out the difference between coffins vs caskets or whether they have carried out your funeral wishes.

Get The Little Book Of Spiritual Quotes For Funerals